“This was expected to be the year when 8K became a practical resolution for future-focused TV and digital cine content producers,” comments CJP Broadcast MD Chris Phillips. “Instead the media world, like everyone else, had to face the upheaval of a pandemic. The consequent restrictions on social gathering had one positive effect in encouraging organisations with a strong membership base to explore the potential of television. We’ve been working with several football clubs by making their matches accessible to fans who would otherwise have  attended in person. We also successfully completed a video production and live streaming project for the highest-profile semi-finals and final in the UK football calendar. This solution centred on our Live Sports Production System which was deployed to augment the traditional broadcast coverage with behind-the-scenes content. The resultant video content was then made available online for easy access by supporters during and after each match.” 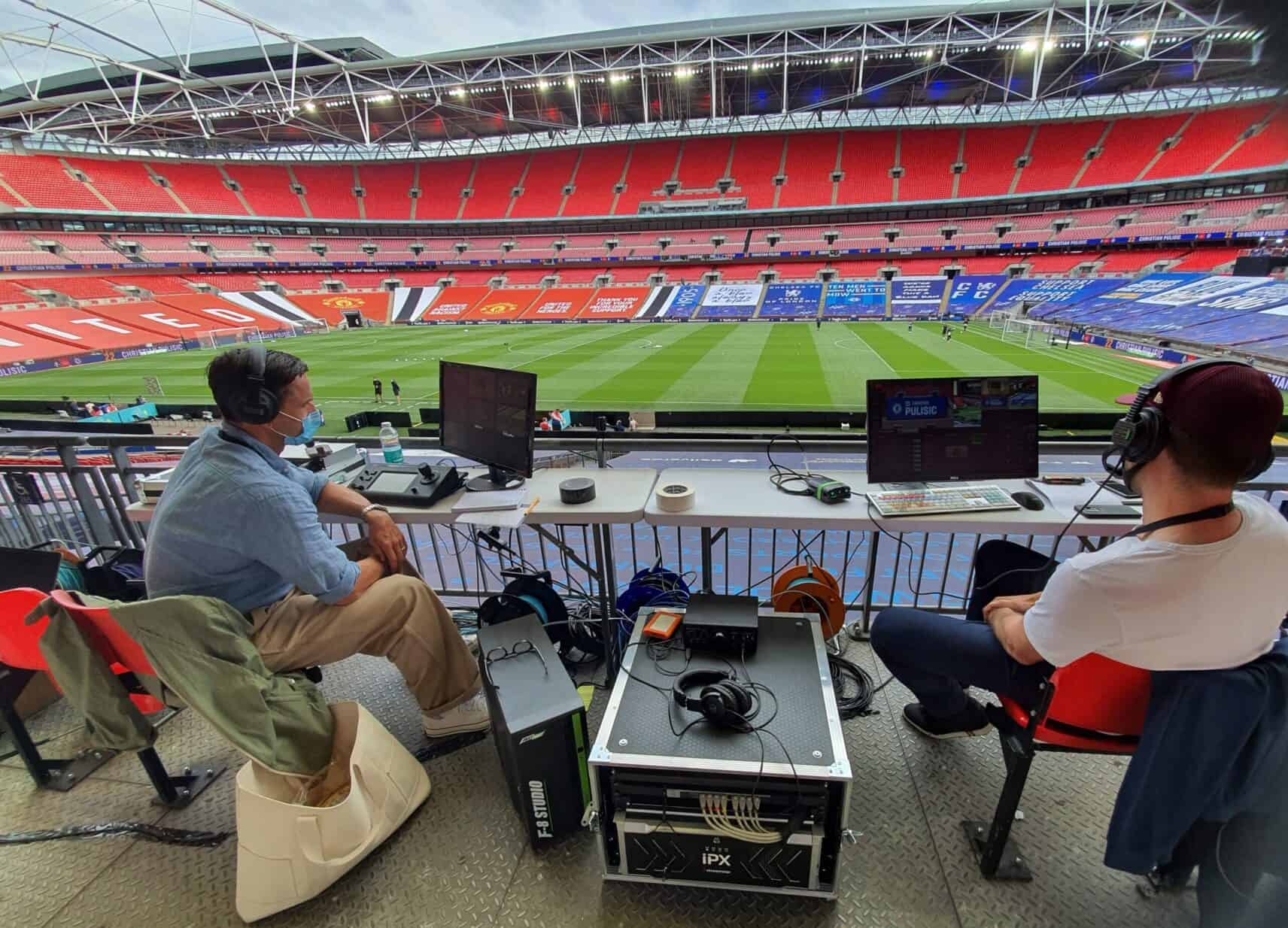 Darlington FC, one of Britain’s leading fan-owned football clubs, joined the growing number of sports organisations working with CJP to establish its own IPTV channel. Core of the club’s new live-streaming service, Quaker TV, is a complete system including a Streamstar X4 Live Production Studio and four-channel talkback. “CJP Broadcast have been helpful with information and guidance throughout the planning stages, always looking to help to be cost conscious and reduce capital expenditure by reutilising our existing camera and audio tech into the new system,” says Stuart Armstrong who played a key role in launching Quaker TV. “The Streamstar technology they have installed provides everything we need at this stage of our experience with live production. Its ease of use and flexibility, combined with the incredibly rich features, enable us to produce our own content and distribute it under our control.”

Also extending its visibility via live-stream television during 2020 is Oxford City FC. The club’s first National League South game of the 2020/21 season was captured and transmitted by a technical team and production crew from CJP Broadcast. “CJP did an amazing job with fantastic camera coverage and a full commentary,” says Oxford City FC’s Commercial Director, Mick Livesey. “They responded quickly and efficiently to our requirements to ensure we could get our first league game covered. The production quality achieved with our new relatively compact Streamstar X2 equipment compared very favourably with top-tier outside broadcasts, including follow shots, closeups, in-game replays and supporting graphics such as our commercial partners logos. All of this was accomplished at a very affordable price.”

Hereford Football Club chose CJP as its technology and production partner for the 2020/21 season. CJP provided a Streamstar-based system, crewing, streaming platform and paywall. This delivers a complete multicamera HD live sports production service to Bulls fans both home and abroad, as well as for the away fans for every home league fixture. CJP has also covered all home cup fixtures for domestic fans where the rights owner is not covering the games on terrestrial or satellite. “This has been a terrific opportunity for Hereford Football Club to extend its visibility and appeal which is especially important given the challenges imposed by Covid-19,” comments Hereford FC Director of Media, Joanie Roberts. “CJP have already delivered five quality streams which our supporters have been impressed with, having pushed for the Club to consider this as an alternative for our behind closed doors matches at the beginning of the season, which the Hereford FC board were keen to deliver. Viewers are now be able to watch Hereford’s games streamed, with our RadioHerefordFC team providing the commentary, directly to their home TV sets, computers, tablets, or smartphones, live from Edgar Street Stadium. Hereford supporters now enjoy the Hereford Match Experience with friends and family, not just within our core region but also reaching our many exiled supporters both nationally and globally, plus our Matchday Highlights taken directly from the stream onto YouTube post match.”

“Our live animated graphics and in-game live replay capability provide the icing on the cake that make for a viewing experience not seen outside the Premier League,” Chris Phillips adds. 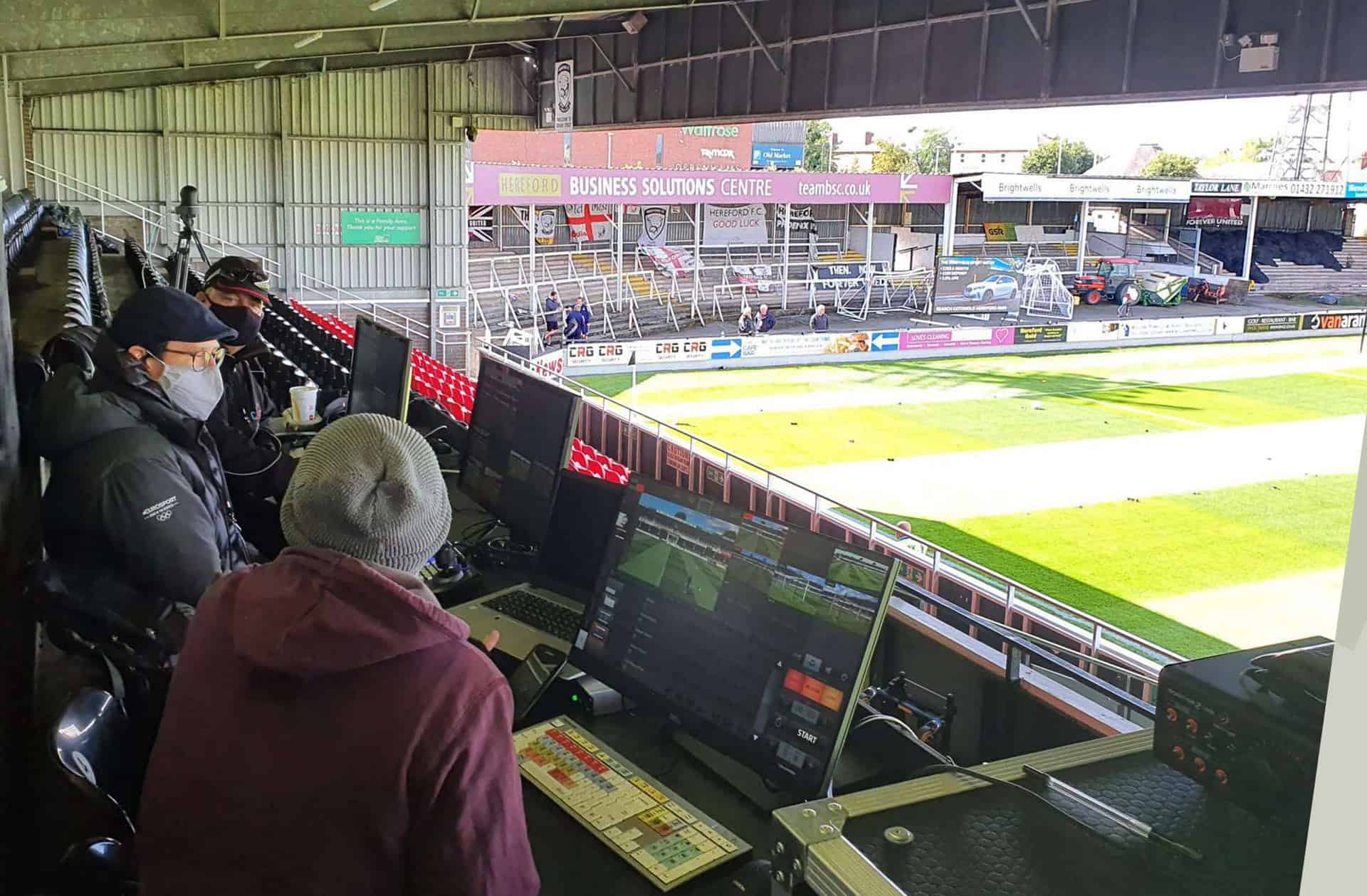 Additional Streamstar projects during 2020 included an X7 production server purchased by video production and live streaming company The Media Bunker, based in Fareham, Hampshire. A Streamstar system was also provided to Yorkshire-based Barrass TV Crews for coverage of a T20 Vitality Blast cricket match at Headingley.

“CJP is proving a very proactive distribution partner with a good understanding both of the traditional broadcast market as well as the increasingly important streaming and OTT segments,” comments Streamstar founder and CEO Rado Toth. “We are living in exciting times for sports broadcasting, with new technology able to reach a wider fan base than ever. There’s increasing demand for multi-camera live productions of the highest quality from club owners and fans alike, while support for lesser-known sporting events is experiencing unprecedented attention.”

In the mainstream broadcast business sector, CJP progressed a large-scale video transcription project for Gibraltar Broadcasting Corporation. Over 15,000 tapes in various format are in the process of being checked, repaired when necessary and transferred to digital media for long-term archiving. “We have accumulated a huge amount of content since we first began TV broadcasting in 1962,” says GBC CEO Gerard Teuma. “Transcribing as much as possible to a digital archive with dynamic backup will give us a useful production resource, hopefully into the far future. The project has already uncovered gems which bring back many memories and historical events.” 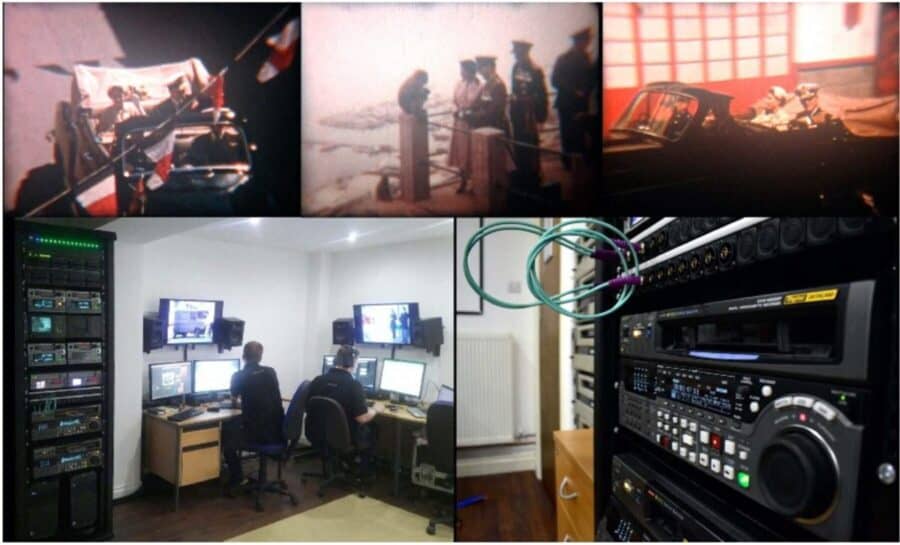 GBC also chose CJP as its technical support partner for a third consecutive year. The contract includes project consultancy and equipment supply as well as routine equipment maintenance. “Our role at GBC is to help ensure the network’s engineering infrastructure remains fully up to the standard needed to sustain its daily transmission schedule,” says CJP Broadcast Technical Manager James Ruddock. “That embraces production and presentation studios, edit areas, master control, playout and the apparatus suite. Specific activity over the past two years has included repair of a Yamaha CL3 digital audio mixing console in the main studio, enhancements to the live transmission chain and the supply of new ENG equipment. We also provided consultancy for a new studio lighting installation.”

CJP also provided technical support services to Letchworth-based system integrator ATG Danmon for various projects during the course of the year. These included the upgrade of ITN’s OB link facilities adjacent to the UK Houses or Parliament, a 4K video production and live streaming facility at the Lafayette London events centre, plus a video conferencing and AV control system upgrade for a European legislature. “We have built a good relationship with CJP in recent years,” comments ATG Danmon MD Russell Peirson- Hagger. “They have proved a tried and trusted resource which we are pleased to call upon when needed to augment our internal resources.”

In the corporate business field, CJP was commissioned to work on a studio set design and installation project at the London headquarters of an internationally active financial services provider. Successfully completed, the new set is being used to develop HD video productions and podcasts for a wide range of UK-based and overseas clients. The contract embraced full project management and installation of the set and studio lighting, plus a complete technical support package covering all studio infrastructure. 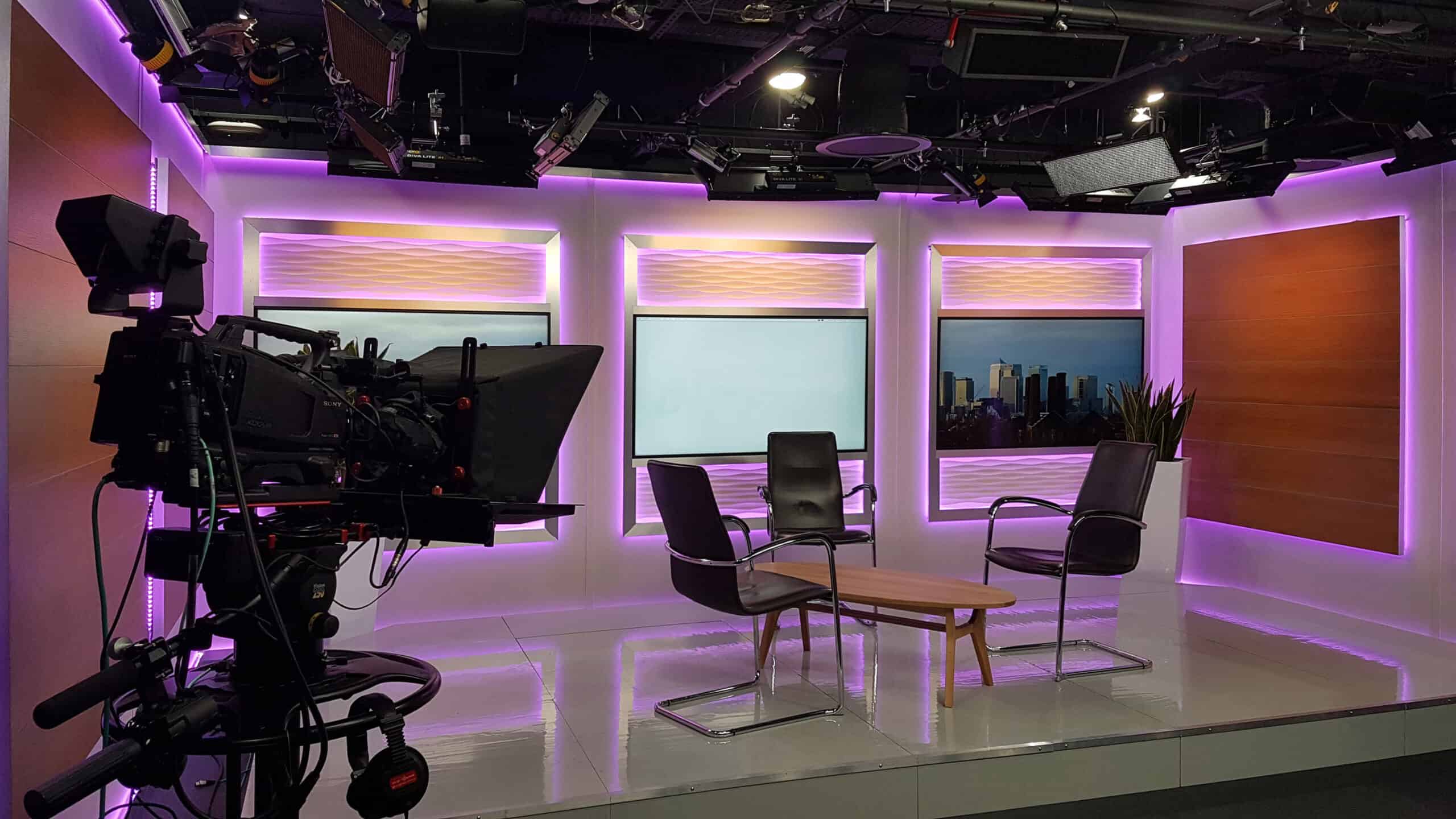 In the educational sphere, Edge Hill University’s Department of Creative Arts renewed its technical support contract  with CJP Broadcast Service Solutions for a further year. The contract includes maintenance of two high definition television studios as well as radio and sound recording studios, plus upgrade planning and installation services. “Our aim has always been to ensure students gain hands-on practice with the technology they will be working with as they start their careers,” comments Neill Cockwill, Creative Media Technology Development Manager. “CJP has partnered with us very efficiently and effectively over a long period, providing the continuity of experience which is essential in any rapidly advancing industry. The CJP team’s skills are evident in the quality of the engineering maintenance they provide and in the perceptiveness of their advice as we plan for the future.”

Leeds Beckett University chose CJP to supply and integrate a Quicklink ST100 ultra-low latency bi- directional live high definition codec in its television studio. This is being used primarily to provide experience in online remote interviewing between commentators in separated studios or with IP-linked contributors. “As part of a requirement from the accrediting body for our BA Journalism course, we needed to include live video calls in our TV news,” says LBU Media & Communications lecturer Chian Gatewood. “The CJP engineering team were very detailed in the job and completed the installation within their specified time period. The unit is fantastic and very easily controlled via a standard web browser.”

“We are also expanding our role as a product supplier with our appointment as exclusive distributor of the Mo-Sys StarTracker Studio to the educational, sports, corporate and regional broadcast markets in the UK, the Republic of Ireland, and Gibraltar,” says CJP Broadcast Sales & Service Executive Kieran Phillips. “StarTracker Studio is a complete three-camera 4K virtual studio system which can be expanded to source from up to 16 cameras.” 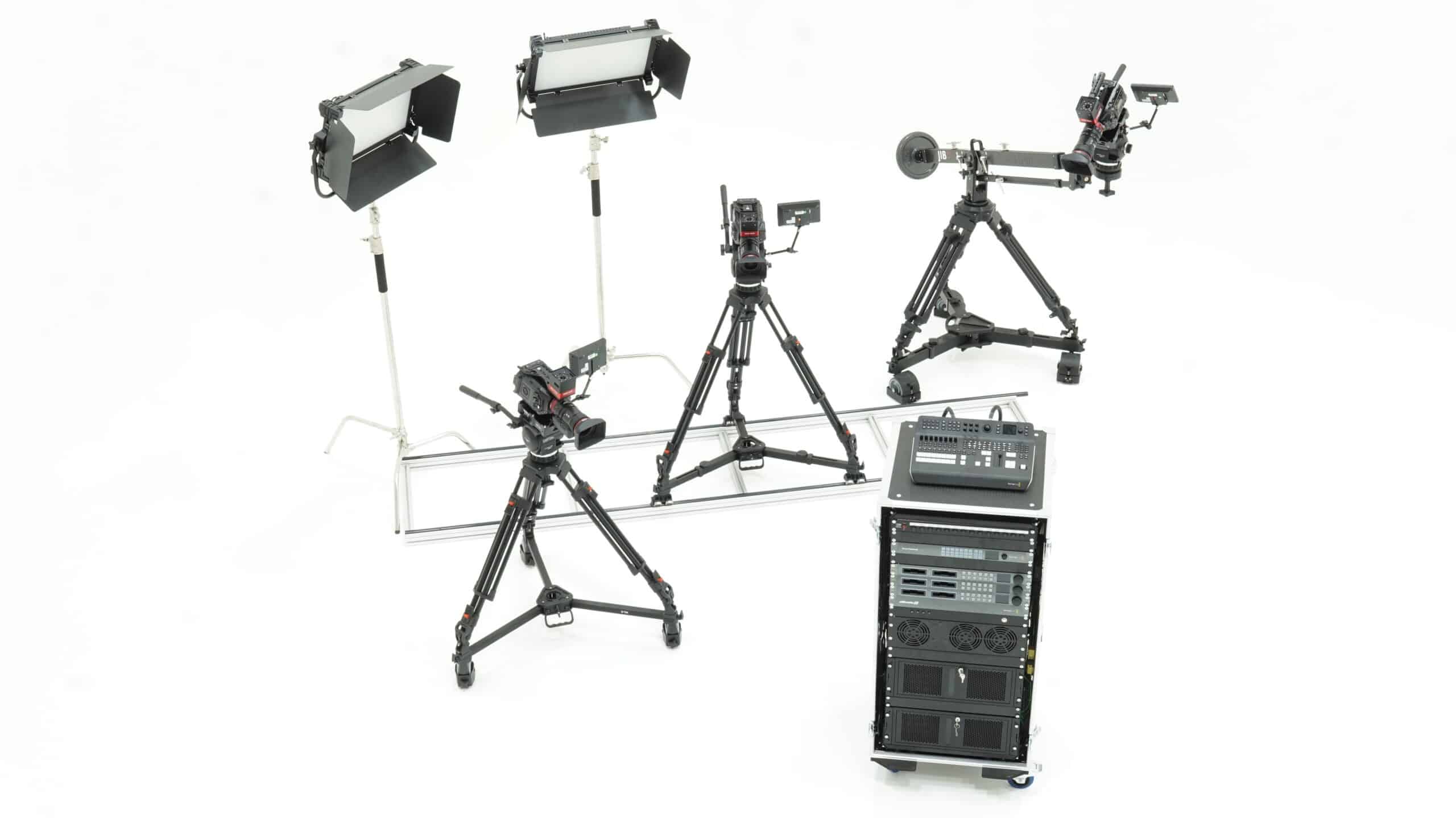 “CJP has secured a strong presence  in the enterprise market for which we created StarTracker Studio,” adds Mo-Sys Commercial Director Mike Grieve.  “The CJP team has proven experience in providing the hardware, software and supporting services which are needed across this sector, not least with its Live Sports Production solution which is ideal for integration with our technology.”

“I would like to thanks the entire CJP team for their commitment, enthusiasm and flexibility during this very busy and unusual  year,” Chris Phillips summarises. “2020 has been very difficult and challenging for our sector. It is a great credit to our staff and suppliers that we have adapted and expanded our offerings to  meet the increasingly advancing requirements of our customer base. This has enabled us to springboard from a very positive platform as we enter into 2021. With some very interesting projects on the horizon, we look to further increase our customer base and technology offering. We round off 2020 with a very welcome new addition to our engineering team: Joe Franklin,  who joined us in November with a 1st class Hons BSc degree in television production technology from Solent University. His passion for the industry is evident from his university project, developing an infra-red-based camera tracking system.”